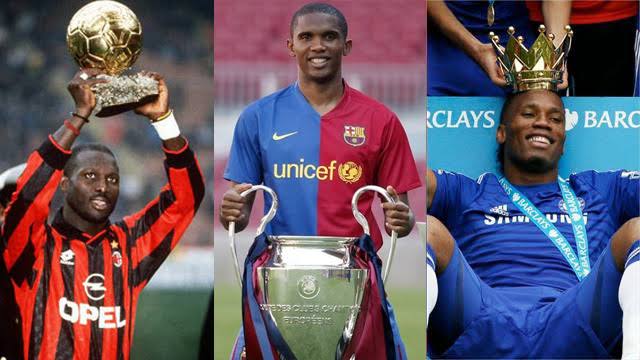 Like other continents, Africa is home to a wealth of talents, both continental and international. Among other talents, the Cameroonian legend, Samuel Eto’o, the Ivorian, Didier Drogba, George Weah.

In this article, we present to you the five greatest African footballers of all time that the continent has witnessed, and who have confirmed that it is on the black continent as well as in Europe.

Augustine Azuka «Jay-Jay» Okocha, born in Enugu, comes from a family of footballers and the name of Jay-Jay was inherited from his older brother James, who was also a footballer.

Jay Jay Okocha is a street kid who started playing on the street like many other African football stars, usually with a makeshift ball.

Okocha began his career when he joined Enugu Rangers in 1990 and made great strides with the club before joining Borussia Neunkirchen, a German third division team.

In 1991, Austin Okocha joined Ghana’s international forward at Eintracht Frankfurt in the German Bundesliga. He was transferred to the Turkish giant Fenerbahçe for about £1 million, where he spent two seasons from 1996 to 1998, then joined the France Paris Saint Germain team for an estimated £14 million in 1998.

Jay Jay Okocha also played for Bolton Wanderers where he helped the team survive relegation and his goal against Westham United was even voted by fans as the best goal of the club in 2008.

Okocha also had a season with Qatar SC then moved to Hull City in England. In 2007.

At the international level, Augustine Okocha won the most prestigious tournament in Africa (Afcon) in 1994 with the super green eagles of Nigeria and was a finalist in 1998; third place: 2003, 2004 at the African Player of the Year Awards organized by the African Football Confederation (CAF).

Tito, as his mother called him, began his youth career in 1988, where he played for Tourcoing and then moved to Abbeville in 1989.

Drogba joined Le Mans in League 2 in France and made his team debut at Le Mans shortly afterwards and signed his first professional contract in 1999. That same year, he and his Malian wife Alla had her first child, Isaac. Drogba spent four seasons with the League 2 team before moving to Guingamp for £80,000, where he spent only one season from 2002 to 2003.

Didier Drogba left League 1 for Olympique de Marseille for £3.3 million and became a fan favorite because of his excellent performances.

Drogba’s performance attracted Chelsea and he then signed for the club for a record £24 million and scored his first goal against Crystal palace in the 2004 season.

The Ivorian international spent eight seasons with Chelsea, which earned him four Premier League trophies with three FA Cup and the most prestigious UEFA Champions League trophy of the 2011/2012 season.

After a successful career with Chelsea, Drogba went through Shanghai Shanhua in China, the Montreal Impact in America and Galatasaray in Turkey.

Drogba is known for leading Côte d’Ivoire’s qualification for its first FIFA World Cup, held in Germany in 2006.

Samuel Eto’o Son, born in Douala, is a retired Cameroonian professional footballer who played as a striker. At its peak, some football fans and experts considered Eto’o to be one of the best strikers in the world.

Samuel Eto’o moved to Real Madrid at the age of 16. Due to the competition in his position with more experienced players, he was forced to leave on loan before joining Majorca in 2000, where he scored 70 goals. His consistent and impressive form led him to join Barcelona in 2004, where he scored 130 goals in five seasons and also became the record holder of the largest number of appearances of an African player in Liga.

After joining Inter Milan in 2009, the Cameroonian became the first player to win two European triples after his consecutive successes with Barcelona and Inter.

After short stints with Anzhi Makhatchkala, Chelsea, Everton and Sampdoria, Samuel ETO returns to a prolific form in the Super Liga.

Born in Bouake, Côte d’Ivoire, Gnégnéri Yaya Touré is a professional Ivorian footballer who began his career with the Ivorian club ASEC Mimosas. His performances attracted the attention of Europe and he was in Beveren, Metalurh Donetsk, Olympia cos and Monaco before moving to Barcelona in 2007. He has played over 105 games for the club.

Yaya Touré was part of Pep Gaudriola’s historic Barcelona 2009, which won six trophies in a calendar year. In 2010, Touré moved to Manchester City from the Premier League and helped the team win its first Premier League trophy in 44 years.

Arsène Wenger, former legendary coach of Arsenal, brought him to Europe for the first time and signed him for Monaco in 1988. Weah moved to Paris Saint-Germain in 1992, where he won League 1 in 1994 and became the top scorer of the UEFA Champions League 1994-1995.

After his consistent and impressive performances, George Oppong Weah signed up for AC Milan in 1995, where he spent four successful seasons, winning the A Series twice.

He moved to the Premier League towards the end of his career and was in Chelsea and Manchester City, where he won the FA Cup trophy with Manchester City.

The 1995 FIFA World Player returned to France to play in Marseille in 2001 and ended his career with Al-Jazeera in 2003.

George Oppong Weah is one of the most unfortunate players to have won the UEFA Champions League despite his booming football career.

Oppong Weah represented Liberia in two African Cup of Nations tournaments and entered politics in Liberia after retiring from football.

He is the founder of the Congress for Democratic Change and ran for president in the 2005 elections, but failed to lose to Ellen Johnson Sir leaf in the second round of the election. In 2017, George Oppong Weah was elected President of Liberia, defeating Acting Vice-President Joseph Boakai, and took office on January 22, 2018.

Meet the 10 most effective African presidents in 2020